My three birthing experiences were completely different. With my first son labor was natural with a midwife who performed hypnosis on me (which worked to reduce my pain for a good portion of the labor), and a bit of Pitocin to finish dilation. My third son’s birth was a planned C-section and interestingly the quickest and easiest recovery. My middle son’s birth had all possible labor scenarios: overdue induction, natural labor with a midwife, dysfunctional labor progression with Pitocin added, epidural pain relief, and physician performed C-section.

I was overdue with my middle son and the midwife would let me go two weeks overdue which I did not like. I wanted to get him out of me so I pushed for induction at nine days past my due date. We arrived at the hospital and were admitted at 9 pm.  The induction began but had to be stopped immediately because my contractions became too strong. The medication was pulled but the induction had started contractions so the labor had begun.

Labor continued without induction meds throughout the night. I developed a fever and my son’s heart rate indicated some distress so the midwife strongly urged us to continue with natural labor because she said he would likely end up in the NICU if I was given an epidural. I was confident in natural labor because I had achieved natural childbirth with my first son’s birth. However, the labor would not progress and his heart rate continued to concern the midwife. I labored in different positions to try and improve his heart rate, but this did not help. She put me in the tub, but that just slowed down my dilation so I headed back to the bed.

I had the strange labor reaction of incessant burping which was awful to me. My son now finds this hilarious as burps are super funny to him. (A bizarre side effect with my first son’s labor I was plagued by hiccups.) I continued to burp and endure contractions all night long but every time my dilation would progress, it would immediately go backwards again. The midwife was mystified by how I would dilate to an 8 or 9 but shrink back to a 7 over and over again after each contraction.  She gave me Pitocin but that did not work to progress my labor either. My son’s heart rate eventually improved so she wanted to try an epidural to see if I could sleep. She thought sleep would progress labor to full dilation. I hunched over for epidural placement at 7:30 am.

I could not sleep even though I could no longer feel the contractions. I was relieved his heart rate was better but I feared progression would not come on its own. By 10:30 am the midwife announced we were moving to C-section because of failure to progress in a dysfunctional labor. They used my epidural to administer more medication for the C-section surgery.

Being wheeled into the surgical suite scared me. I had never had surgery before but I knew I just wanted him out of me because it would be safer for him to be out rather than in me with his poor heart rate issues. The staff pulled up a blue sheet so I didn’t have to watch them cut me open. I felt only tugging and pulling. In surgery I became very cold and my blood pressure plummeted so they gave me oxygen and talked to me to keep me awake. My husband did watch the birth and he took pictures of the doctor pulling my son out of me. After the surgery I was able to look at the photos and I was thankful he took them.

I cried when I heard him cry because I knew he was out of me and he was safe. They said he was a big baby as he weighed in at 9 lbs. 4.4 oz. Afterwards the physician told me he was so big she didn’t think I could have pushed him out because he never moved down into my pelvic canal. He would not have fit through my pelvic bones. I was relieved to have given birth in an age when C-sections are successful and safe because if it had been years ago my son and I probably would have died in childbirth or at the very least experienced severe complications. A very scary sobering thought.

We made it through a childbirth that had so many scares, twists, and turns. I am so thankful he is now a healthy 10-year-old boy who makes us laugh with his animated noises and amazes us with his inventions. He is a smart, athletic, and social boy. We are so lucky to have him.

Originally published in the Birth Story series on https://fitfoodiemomlife.wordpress.com/2016/06/24/the-birth-story-series-meet-julie/ 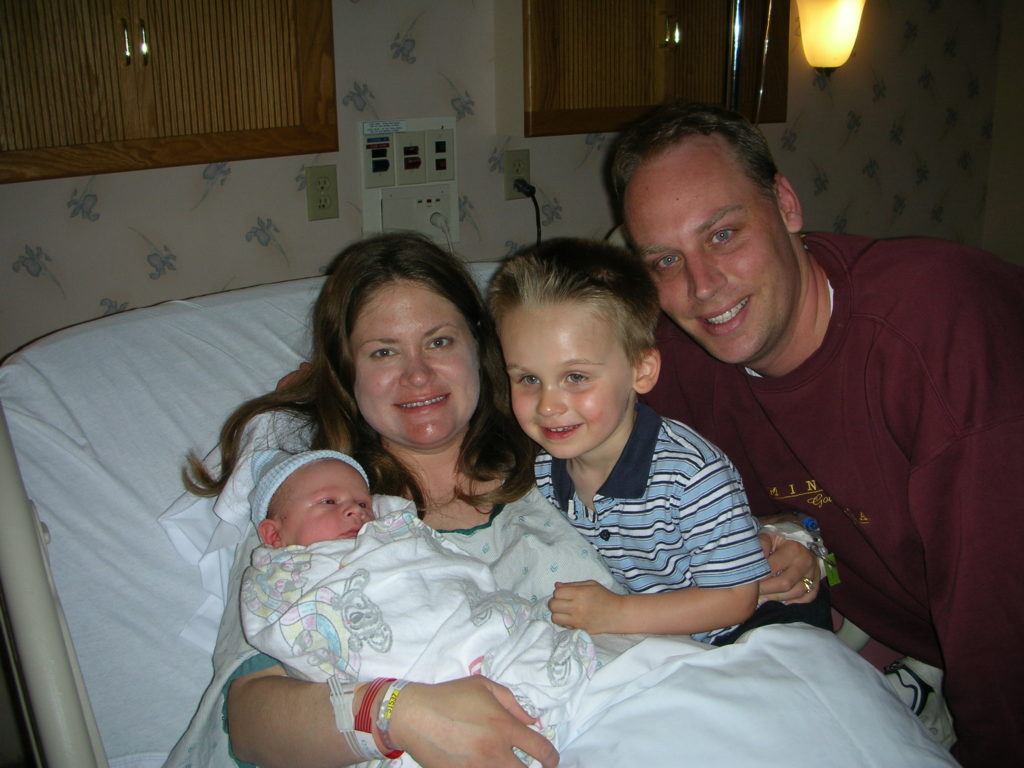