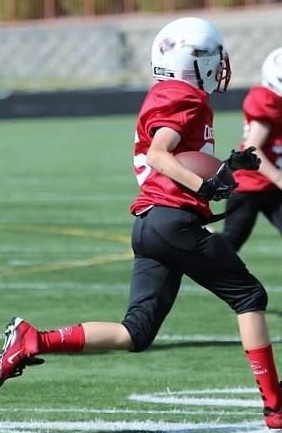 For The Love of Football

My son loves football. The season is almost upon us again and those fears of what other kids will do to him rattles my nerves already. I’m afraid of what the kids who are poor sports will do to him. He has been the victim of unsportsmanlike behavior that has enraged this mama bear to the edge. It has taken all my restraint to not go ballistic.

Kids get riled up and they might go too far, and I get that. But when it’s a blatant act of intent to do harm, my blood boils. It boils for any kids I see who are the victim of an intentional angry act but when it’s my own kid, it really curdles my blood. I wonder what their parents and coaches are teaching them or not teaching them when they act out of brutality.

When my son was in fourth grade he loved to run the ball as a running back. He was a fast runner, one of the fastest in his grade and with his thin muscular frame this position was a perfect fit for him. In a mid-October game, his team was playing a particularly rough team whose parents shouted from the sidelines saying things like “Kill ‘em!” and other phrases I think should never come out of parents’ mouths like “Slam ‘em down!” or “Knock ‘em dead!” The parent spectators on our team’s side were tame and more encouraging. We’d shout “Go Johnny!” or “Good play!” or “Way to go!” Well let’s just say the kids on the team we were playing matched the parent brutal comments.

One kid in particular was being unnecessarily aggressive. He had hit hard enough to make three of our team players sit out. According to the kids, this player was being downright brutal and mean. The refs didn’t pull him from the game, but I wish they would have because his next brutal move hurt my child. Tackle football is rough, that’s a given. But there is a correct and good sportsmanlike way to tackle and there’s an illegal way to tackle. He charged at my son and speared my son from the side leading with his head. His helmet slammed into my son’s helmet knocking my son to the ground. He didn’t even see him coming.

Our coach screamed, “Hey! You can’t tackle like that! That’s illegal.” He was steaming mad.

My son crumpled to the ground and I could hear him crying from the sidelines. He doesn’t usually cry when tackled so I knew damage had been done. He sat on the sidelines for a while. He seemed fine and even said he felt fine. The refs finally pulled brutal kid from the game. It took four kids sitting out for injuries for the refs to pull this kid from the game. But the harm was already done and it couldn’t be undone.

The headache didn’t go away; it was still there the next morning. I called the pediatrician. I got the dreaded request from the doctor to take him in for assessment for a concussion. Our appointment was for the next day. We saw signs of concussion in him in addition to the headache. He was clumsy and would just fall down laughing and being silly. He had trouble sleeping and was irritable. Ibuprofen didn’t alleviate his headache either.

The doctor told us he had a mild concussion. He had to sit out of football playoffs, out of gym, and even out of recess for over a month. No physical activity at all. He’s an active kid, so this was so hard for him. He was given only 50% of the schoolwork to allow his brain to heal. He was assigned physical therapy to re-establish balance.

We later heard the child who hurt him was told how he his spearing illegal hit resulted in a concussion and he cried. Nice sentiment, but he couldn’t undo what he had done.

The next year in football my son was running the ball again in a game and was the victim of harming unsportsmanlike behavior again. His team was winning by a lot like twenty to zero. The other team was mad about it. The players were stomping on our kids’ hands when they were down, kicking them in the back, and face-masking (which is when a player grabs the metal face mask and pulls which is illegal and can cause significant harm). My son had the ball and he was within six feet of making a touchdown when he was tackled. He got up as usual.

The coach called a time out and I saw streams of brown down my son’s cheeks. At that point I didn’t know what had happened, I thought perhaps he was crying because he was hurt. He shook it off and went back into the game. He made the touchdown and then he told us the full story.

The player on the other team was so furious, he had picked up a handful of dirt and threw it in my son’s eyes while he was still lying on the ground. This made it look like he was crying. The dirt caused his eyes to water which made him lose his contacts out on the field. But he was determined to not let that stop him. He went back into the game without contacts. With a dirt and tear stained face, he made that touchdown.

I’d never been so proud of him in my life. He didn’t let the other player stop him. He kept going and he succeeded.

It’s truly a rough sport but he loves it and though it makes me nervous with all the kids out there who play dirty, I’m happy to say it doesn’t stop my son. He keeps fighting the good fight. He follows the rules, he doesn’t get thrown out of games for illegal moves, and he honors the goodness of the sport.

As a parent, I wish all parents and coaches would teach their kids that hurting someone in not worth any win. It’s just a game and hurting someone is not ok. When kids aren’t taught to be good sports, no one wins.

This article was originally published on Her View From Home.

To view this article on Her View From Home click on the link  http://herviewfromhome.com/when-another-kid-is-a-poor-sport-and-it-hurts-my-kid/