One of my three sons is infatuated with crafts. Boy crafts I mean. Not simple coloring, cutting, or gluing but deeply involved mini man crafts made with tools. I admit he is quite creative with his inventions. Though it’s a tough pill to swallow when his boy mind disregards what this girl mom thinks is OK when making these crafts. We clearly don’t see eye to eye.

Some crafts have gone horribly wrong. 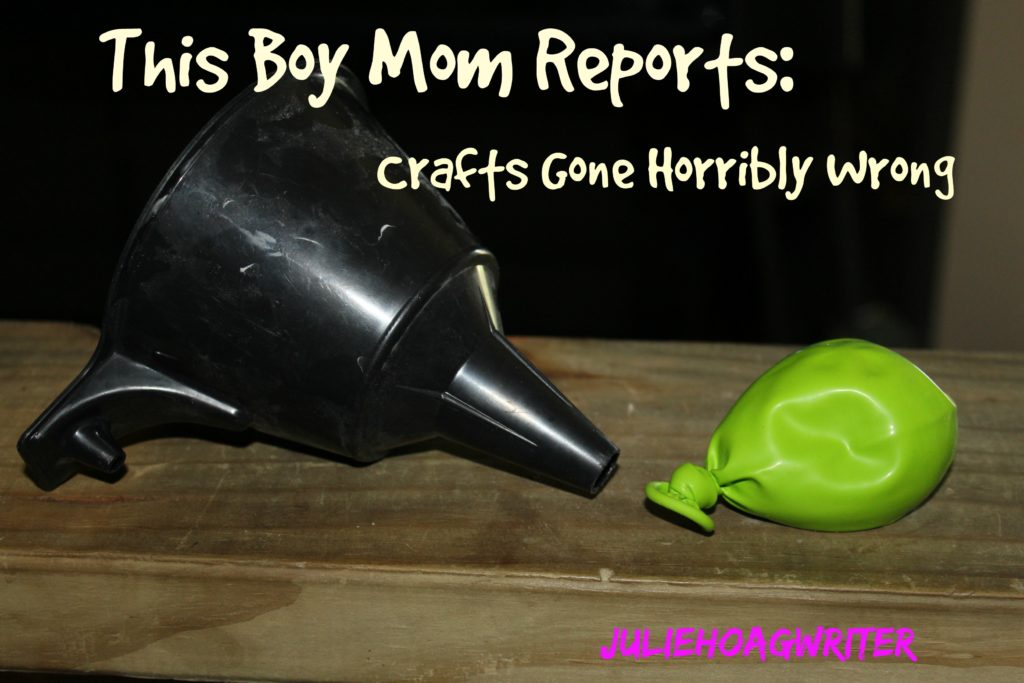 This Boy Mom Reports: The making of a homemade stress ball.

One Saturday morning I came down the stairs to find my middle son in the kitchen making a homemade stress ball. The ingredients of this craft were innocent enough: a balloon, flour, and superglue. The giant flour bag was on its side with flour splatted out as he had filled his balloon with it. A spray of flour was speckled across the floor in a four-foot square area in front of the stove.

I knew I could handle this mess. All I needed was a cloth to wipe the counter and a broom to sweep the floor. Easy fix.

However, the shockers kept coming.

The superglue lid was off. A pea sized nibble of superglue had dribbled on the counter. I touched it and cringed; dang it was already dry. I couldn’t even pick it off. A permanent button on my counter-top to remind me of this day.

Ready for a guffaw?

“I used a filter to get the flour into the balloon, Mom. And it worked really good.” He showed me the stress ball and smiled proud with flour flecked across his cheeks.

I was perplexed. Where did he get a funnel? I don’t have one in the kitchen.

My jaw dropped as I looked into the twenty-pound flour bag. Amongst the white flour sat the oil change filter funnel from the garage. I stared at him speechless.

I was mortified. The filthy toxic oil change funnel had surfed through my flour bag.

When I asked if he washed the funnel, he just shrugged and said he didn’t remember. Not a big deal in his world I guess. He said he rinsed it but he wasn’t sure if he used soap before plunging it into the flour bag. He beamed a giant proud boy smile and held up his invention. I sighed and grimaced as I chucked the flour bag into the trash. I needed to add flour to my shopping list, but I needed a pen to make that note.

This Boy Mom Reports: Where have all the pens gone anyway?

Crafts made with pens.

A few days prior to the stress ball fiasco, I came downstairs to find my son at the kitchen counter. His back was to me but he was sawing something with high vigor. As I peered over his shoulder I saw he had a steak knife and he was sawing a pen against the countertop. He had nothing underneath. There were ten half inch pieces of a pen tubes on the counter and a pile of little springs.

“Making bullets!” he said pointing to the short plastic tubes.

He was also mining the pens for the pen springs for another part of his shooter craft.

I spied saw marks in the actual counter. Crap! He had sawed right into the wooden countertop edge. In case you didn’t know, serrated steak knives saw into a wooden edged countertop like cutting into butter. I handed him a plastic cutting board to cut on and told him to please leave us some pens for writing.

Another morning after a shower I came downstairs and found my middle son making puppy chow in the kitchen. For my middle son it’s another day another craft. This time it was a food craft gone wrong. Powdered sugar was spewed across the stovetop and crumbs of Chex cereal were littered across the counter. A not so nice surprise, cereal was on the floor too I found out as I took a step and crunched them between my freshly showered toes. The lid of the peanut butter was off and the peanut butter inside was speckled with mini chocolate chips.

Both he and my youngest son smiled at me with white powder-sugared lips. “Cereal in the morning, Mom!” He chomped down before he spoke. “Peanut butter too, see it’s healthy.”

I sighed and wondered how I would clean all this up and be out the door in ten minutes for basketball. An impossible task so I gave up. At least they fed themselves breakfast. Sort of a breakfast I guess. Cereal was involved so that counts, right? However I spied three chocolate bar wrappers on the counter.

This Boy Mom Reports: Crafts Gone Wrong on the Victim: ie. The Table.

Our family table has been the victim of crafts gone wrong too many times. Many crafts have been made at our craft table involving super glue and markers.

Superglue, oh superglue! You are usually my friend, but when you stick a triangle of black construction paper to my table, you are not my friend. My son dropped the paper piece all sopped out in super glue on the table a year ago. Now our table has a perpetual freckle.

The table bears many marker streaks. Sharpies are great for writing faces on balloons, but rolled off red sharpie face marks on the table I really can do without. We have pink and orange highlighter scars across the table that leaked through paper. This leaking through is something I did not know before my boys. Now it’s a rainbow menagerie of color across our table. Grandpa wonders when we are going to buy a new table. Not for a long time Papa. Too many more years of crafts to victimize this table with before that should happen.

Though I Do Love My Creative Boys, Crafts Gone Wrong and All

I love my boys and I love their version of crafts. Somday I will look back and cherish these days when they are young and destroy my kitchen like little tornado mad scientists. I will not forget them leaving their scraps about the floor like the cupboards vomited. I almost trip over the craft supplies daily and barely miss stepping on a hot gun as I pour my coffee.

A version of this was published on Knowmom.net. Link below.